The anemia is one of the most common ailments of our time and occurs when there is a low concentration of hemoglobin in the blood due to various factors, from low iron intake or deficiency in its absorption to more important reasons such as bleeding or diseases.. 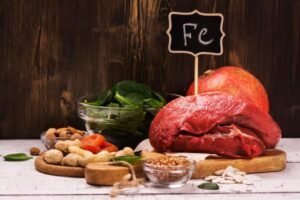 The most common is the one that occurs due to iron deficiency and that can be treated through food, here we bring you this article with some suggestions and tips so that you know how to eat to cure anemia, either knowing the foods that should always be on your plates, such as those that you should keep out of your sight.

The symptoms of anemia can vary depending on the person’s age, general health, sex and nutrition, but in general they are manifested through:

However, it should be noted that we often talk about anemia as a silent disease since it is usual that on many occasions it is asymptomatic, so people who suffer from it may not realize it until they are performed. A blood test where this alteration is reflected.

However, in case you are aware that you have this medical condition, before this picture of symptoms it is very important to go to the doctor because anemia rather than a disease itself is the symptom of a certain condition, whether it is iron deficiency or any other major condition such as kidney problems, defects in the synthesis of certain compounds, among others. So in order to treat anemia, you first have to know what the underlying cause is that is causing it.

Anemia is one of those diseases that despite being well known and popular, many people do not quite know exactly what it is due to and how it affects the body. The truth is that we group under the name of anemia a set of conditions of different kinds that are characterized by having one aspect in common: the decrease in the number of red blood cells present in the blood.

But this decrease may be due to many possible causes, from bleeding to kidney problems. Below we list the main types of anemia that exist, as well as we point out what type of anemia can be cured through food:

What is good for anemia in adults

If it is a low presence of iron in the diet, you should start incorporating certain foods. One of the food groups that you cannot overlook are animal proteins, in this sense your best options are:

In some cases, in addition to adapting the diet, it may be necessary to add supplements of this nutrient to the diet to achieve the appropriate iron levels. Even so, the fact of adding iron to the diet should always be subject to a medical prescription to avoid exposing yourself to an overdose that could have side effects.

What to eat when you have anemia: vegetables

The plant is a food group serving for almost any ailment, because you bring lots of nutrients and benefits. However, this group is very extensive and some products for anemia that can serve you more than others. Here we explain which the best vegetables to fight anemia are:

This point is somewhat conflictive, because despite the fact that nuts are a product that should be present in your diet, you should be careful and watch not to overdo it, since its fat content is very high and you can lose for a aside what you earn for another.

Normally it is recommended to take a handful daily, yes, in its natural version, without salt, honey or any additive. You can consider any of the following alternatives:

Usually snacks are a troubled day of the day, because the body usually asks for sweet. In these cases you still have a choice, you can choose to:

All of them iron-rich foods ideal for improving blood hemoglobin levels and curing anemia. In the same way, you can also choose to consume cereals, since it is a food with a high contribution in iron, so they will be ideal to combat anemia.

Remember that if you are suffering from anemia due to a deficit in the consumption of iron, you must incorporate it quickly and effectively into your diet from now on, taking care of what you eat to lead a diet that is as balanced and nutritious as possible.

In the case of anemia in pregnancy, you should take into account all the recommendations made by your doctor to ensure your health and that of your baby, since the medication is not recommended during the gestation process. In your situation, following a good diet with adequate iron levels is even more important.

Detox juices for the liver

How to feel without hunger during a diet

Parsley tea: what it is for, benefits and contraindications

Which foods make you fatter?

Is it bad to eat burnt food?

Properties of chili for health