The Piper methysticum is a plant native to the South Pacific, Polynesia area, which comes from the same family as pepper but which only underground stems and roots are used in traditional medicine. It is mainly used as a natural remedy to reduce anxiety-related disorders due to its great calming effects, but you must be very careful with the dosage and the way in which this plant is taken, since an excess leads to hallucinogenic effects and health problems. Serious as liver damage. 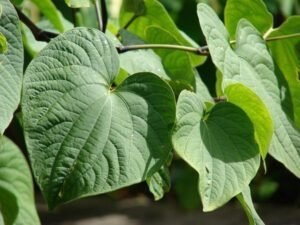 If you want to know more details about the properties of kava kava herb, how to benefit from them correctly to avoid possible unwanted effects, keep reading this article. In addition, we also detail what are the contraindications of this medicinal plant so that you can take them into account.

The properties of the Piper methysticum plant

Among the properties of the kava kava herb we must highlight its high content in kavalactones, specifically it contains high levels of the following components:

The components mentioned above have a temporary effect on our body since in a few hours they are eliminated through the urine. But the abuse of these substances when ingesting high doses of this plant, also called kawa-kawa, or due to its prolonged consumption, will cause damage to organs such as the liver and kidneys. It is for this reason, among others, that it is vital to take the indicated doses under medical supervision and to consume the herb in commercial formats that indicate the doses of supply and never exceed these indications.

Due to the components of this herb, with its regulated consumption, we can get to enjoy some of the main benefits of the herb Piper methysticum:

It is possible to forget about this, the nerves and stress accumulated throughout our lives thanks to the kavalactones mentioned above and their great relaxing and calming effect. This effect is both at the muscular level and at the psychological level, for this reason it has been used in different natural treatments to combat serious problems of anxiety, attention deficit, hyperactivity or ADHD and epilepsy. Always under medical control and without mixing it with specific medications for this purpose.

Kawa-kawa has always been widely used as a natural antidepressant, since it has a great ability to stimulate certain parts of the nervous system while relaxing others. Thus, it is also used to combat problems such as chronic fatigue syndrome. It should be administered as prescribed by a doctor and should never be taken if a medical treatment for depression is already being followed , if this were to occur the most likely result would be the opposite of that sought due to the interaction of the different substances.

Thanks to the relaxing and calming power of the mentioned components, this plant can help us treat insomnia, but we should not mix it with other herbs or medical treatments.

Due to the ability to relax both muscles and mind, it is widely used to combat severe headaches such as headaches and migraines, in addition to severe muscle pain due to injury or bad gestures.

Other benefits that this South Pacific medicinal plant is believed to have but which are not entirely supported by science, but rather are based on beliefs and experiences of people who have consumed it are the ability to help cure tuberculosis and Infections in general of the respiratory tract and to prevent different types of cancer.

How to take kava kava

In order to benefit from the properties of Piper methysticum we must know how we can take it. The best way to consume it is in an infusion or tea prepared with underground roots and stems or rhizomes and always buy commercially packaged formats in which the dose is indicated, since the plant will also be properly treated for consumption. On the other hand, if we take it directly from nature or cultivate it, we risk suffering serious side effects. In fact, the generally recommended dose is 250 mg of the commercial extract daily for three weeks, but the dose should always be prescribed by a doctor. Pay attention to how to take kawa-kawa herb correctly:

How to make kava kava tea

This medicinal plant cannot be taken more than 3 months in a row in the minimum daily doses, always under medical control, since then an intoxication would occur that would give way to some side effects and conditions derived from this excess.

Possible side effects of Piper methysticum

If our body is sensitive to the components of this plant or, especially, in case of exceeding its consumption, this medicinal herb can produce certain side effects, among which the following should be highlighted:

In case of detecting that we suffer from any of them, it is imperative that we abandon their consumption immediately and go to the doctor to review us and indicate something better for our condition.

Taking kawa kawa is prohibited if you have any of the following conditions or situations:

What are the uses of rosemary?